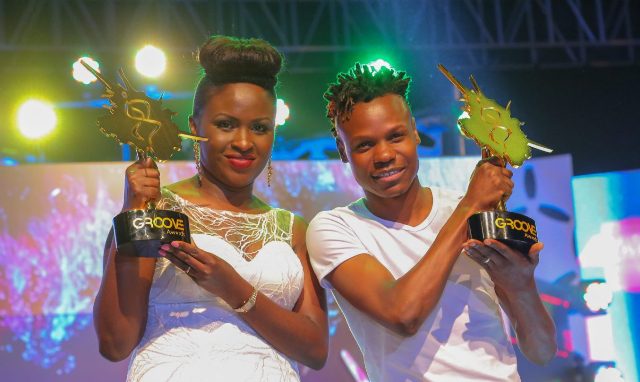 The nominees for the 13th annual Groove Awards with Safaricom have been unveiled at an exclusive red carpet event held at the Mövenpick Hotel, which saw artistes nominated in 19 categories with surprise new entries into some of the most tightly contested spots.

This year Male artist, Female artists and Group of the year categories have been revamped and collapsed into one category Artist of the Year becoming the most coveted award of the season.

The contenders in this category include the reigning Female and Male artists of the year Mercy Masika who received three and Eko Dydda two nominations respectively.

Other nominees in the Artist of the Year category are Guardian Angel, Moji Short Babaa, Gloria Muliro and hip-hop group Recapp.

“The announcement of the nominees follows a rigorous process of reviewing 143,684submissions that the public put in. The process was refreshed to involve the public for the first time in the nominations process and the feedback has been overwhelming. We are excited to be unveiling the list of contenders for the 13th edition of the Groove Awards with Safaricom,” said Groove panel Chairman Charles Kairu.

“We are truly honoured to be in a position to recognize and celebrate today’s talented artistes and their contribution to the growth of the gospel music industry.”

The theme of this year’s awards show is: “Rebuild, Restore, Reclaim.” It focuses on the message of unity in rebuilding and restoring the glory of the gospel industry.

It encourages a spirit of togetherness highlighting the importance of all in working towards the end goal of shaping culture.

This year’s winners will be announced on June 24 2018 at the Gala Awards ceremony, to be held in Nairobi.