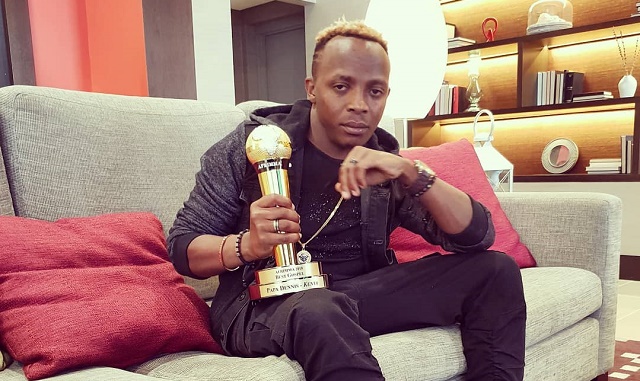 EXCLUSIVE: 5 THINGS YOU DIDN’T KNOW ABOUT PAPA DENNIS, HE HAS A DAUGHTER

Award winning gospel singer, Dennis Mwangi popular known as Papa Dennis shot to the lime light after he was discovered in 2010 by Sadat Muhindi of Maliza Umaskini initiative in Matunda.

Papa and 10 other artistes were signed to the label but the number kept reducing until 2013 when two artistes remained on the label, Papa Dennis and Nairobi Records founder Mash Mjukuu who live together in Umoja before relocating to Komarock Estate.

2015, Mash decided to leave the record label and moved to Pangani Estate where he established his own recording label.

Papa Dennis and his brother Papa Simon later moved to an apartment along Naivasha rd rented by Sadat but when he started misbehaving Sadat stopped paying for the apartment, “At one point in 2017 he was in trouble when his girlfriend was accused of stealing from the neighbour. Sadat went to bail him out at Muthangari Police Station and took him to his own house in Lavington, his brother had to find another place to live,” says Mjukuu who was one of the witness.

Papa Simon moved on to start his second hand clothing business in Adams.

PAPA DENNIS DID NOT HAVE A PLACE TO LIVE

March 2019, Papa Dennis was kicked out of Maliza Umasikini, “According to Sadat, Papa Dennis was struggling with alcoholism and he would dissapear for days and was unreachable at the same time his contract had ended so Sadat decided to release him from the label,” says Mash.

But in an interview Sadat refuted claims of kicking Papa Dennis out of the label stating his contract had expired. “Papa Dennis was a humble and amazing boy throughout the time we worked together. His contract with Maliza Umaskini was officially signed in 2013 and ran up to March 2019, exactly five years so he was not kicked out as it is being claimed.

We sat down discussed and agreed it was time for him to go and further his career  having nurtured him from the time he was an upcoming to an established artiste. We did this to offer a platform for other upcoming artistes,” Sadat said.

The singer moved to Jamhuri Estate where he ranted a one bedroom apartment unfortunately after a few months he could afford to pay the rent and was kicked out.

Papa Dennis moved to a bed sitter in the same estate and when he could not pay the bed sitter rent arrears of Sh27,000, the landlord kicked him out.

He moved in with his on and off girlfriend Martha Wajero who he met during the shoot of his music video, Njoo featuring Tonzi, the two broke up and he had no place to live, his friend offered him a place for a while.

The singer reached out Nairobi Records CEO for help, “November 2019, Papa Dennis reached out to me her wanted to start a taxi business with the money Sadat owed him but since there was no sign of him getting paid.

I offered him a place to stay in my studio at Kirima Building, Pangani. We agreed since the studio was a one bedroom house, he would stay there and maintain cleanliness in the studio while I teach him production work and also let him used the studio for free while we wait for Sadat to pay him and he agreed,” says Nairobi Records CEO.

Papa Dennis was to move in January after they clear the rent arrears of his bed sitter house but it was not possible.

February 5, Mjukuu sent him Sh15,000 through Mpesa to pay and February 6 he topped up the balance of Sh12,000 in cash and the two we allowed to take Papa Dennis things. “On the same day at 6:30pm we left Jamhuri Estate and we passed by Country Cooking Hotel in the CBD for dinner before we proceeded to Pangani.

We reached the studio at 10pm and his friend helped him to unpack his things. I talked to the manager and informed him Papa Dennis will be living in the studio and at 11pm I left for home.” Mjukuu notes.

The next day January 7, the CEO tried to call the singer but he was unreachable, 10am while at his office in Yaya he received a call from the singer, “Papa Dennis called me and said there was an issue in the studio at the time he was at Sarakasi Dome. I picked him in Ngara and we went to the studio.

The studio manager also said Papa Dennis called him and when he was heading to the studio he saw him rushing out and he did not find any incident so he ignored,” said Mash.

Adding, “When he explained it was not making sense, then things became weird, he started staying the neighbours were talking to him when he is in bedroom yet the were no neighbours, the next house was vacant.

Papa Dennis later called the producer for a recording session, the producer was to record another artiste before him.

HIS FAMILY THINKS HE WAS MURDERED

8:50pm his twin brother Papa Simon arrived at the studio to bring the singer his passports, “my brother told me me to bring him his passports, the old one and the new generation with some clothes.

I reached at the studio at around 8:50pm we talked for a short while and he asked me if he can used my phone and I gave him.

He told me to put his clothes and the passports in the reception drawer and said he was going down I wait for him to come back.

The producer was on a recording session with another artiste, he then suggested I call Papa Dennis to bring us some food.

I told him he has my phone and when he tried to call him he did not answer. After a few minutes we called again and he was not reachable,” said his twin brother.

9:30pm, the studio manager who was then at the CBD called the producer to go downstairs and check an incident which had happened, “when we reached down, my brother lying on the ground but he was still breathing though he was oozing blood from his nose, he had no shoes yet he left the studio wearing sneakers, he also did not have both our phones.

At 10pm Mash Mjukuu and the studio manager arrived, we called an ambulance but it came one hour later. The ambulance medics pronounced my brother dead and said they cannot carry a dead body, we have to call the police.

My brother was murdered, he did not kill himself, we have gone through a lot and he stayed strong, why should he kill himself now.” adds Papa Simon.

Celebrities like Ringtone, Daddy Owen and  Mr Seed and among others also arrived at the seen and five hours later at 3am the police arrived and took the body at City Motuary.

The postmortem report could tell whether the cause of death was suicidal or murder, “According to postmoterm exam conducted by Dr Joseph Ngung’u it revealed that he died as a results of decelaration. We have taken all measures including engaging the Directorate of Criminal Investigations (DCI) and now we want them to speed up the investigations because none of us was there when this incident took place,” said Mjukuu.

CELEBRITIES AND WELL WISHERS CONTRIBUTED OVER SH486,000 FOR HIS FUNERAL

Controversial gospel artistes Ringtone and Ole Willy started the singer’s funeral fundraiser and were able to raised over Sh486,000, “We used the money to pay for his mortuary and funeral expenses. The remaining balance of Sh145,000 we want to continue fundraising to help the family build a house.”

PAPA DENNIS HAS A DAUGHTER PENDO

Days after the singer had passed away, a Kalenjin woman from Eldoret appeared with Papa Dennis daughter Pendo, “Even us we were surprised he has a two year old daughter, Pendo.” Mjukuu added.

THE SINGER BOUGHT THREE PLOTS OF LAND IN MATUNDA

“He had three plots of land which he bought a few years back and he was the breadwinner for the family, a house will be the best gift for the daughter and other family members,” says Mash.

The singer was laid to rest on February 19 at his home in Matunda.