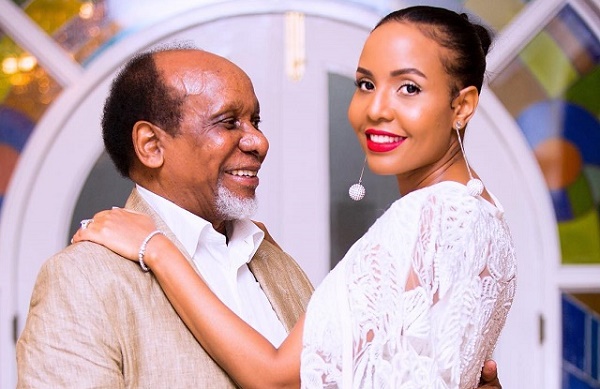 Ten months after the death of her billionaire husband Reginald Mengi, his wife Jacqueline Ntuyabaliwe has opened up about their life together and addressed all the rumours after his death.

The mother of two sat down with popular Tanzanian blogger Millard Ayo. The couple met at a flight while both were heading to London and the two exchanged numbers and continued communicate as friends, “at first when he reached out to me I declined to meet him because I not used to him but I also feared him, plus I was at a different city and I didn’t want to go to London.”

Speaking about her decision to marry a man who was 35 years old her senior, she said, “Once you have loved someone there is nothing people say that will make you break up with the person. We used to be friends for a year before we started a relationship and when he approached me for a relationship, I made a decision to be with him. My relationship with my late husband was the best relationship I have ever been in compared to other relationships.”

Jacqueline says after the passing of her father she almost committed suicide but her late her husband was there to help her, “When I met my husband in 2010, it was a time when my dad was about to die and he helped me, I wanted to commit suicide after his death. At the time I didn’t have kids and did not see the importance of living, were it not for my late husband I would not be alive today. I thank my husband because in 2012 were able to get the twins which gave me a reason to live. My husband was like my dad, my friend and also my husband so when I lost my husband I felt like my world had ended.”

Addressing the rumours that she has killed him, Ntuyabaliwe says, “when my husband got sick while in Dubai and the illness became serious. His brother Benjamin and daughter Regina joined us in the hospital and we stayed with him until when he died. After he passed away there were a lot of rumours in Tanzania among them was ‘I killed my husband’. While in Dubai we were with the Tanzanian ambassador in UAE who helped us in processing and he said it is dangerous for people to say a wife killed her husband and he told his brother, when we get back in the country it important for him to dismiss the claims at a press conference. But when we got back home he didn’t say anything which was something that made me wonder.”

The former singer also says Reginald’s Brother, Benjamin has gone to court to contest the will, “When the will was read that was the last time I saw Benjamin, but later I was told Benjamin and his daughter went to the courts to contest the will. After divorcing his first wife they divided the matrimonial assets, the first wife stayed with two kids while he lived with the other two kids. On the will it states that the shares that he remained with in the companies after divorcing his first wife goes to his twin sons Jaden and Ryan. For the companies that he started after getting married to me, his shares will be shared to me and my kids. My sister was also named as the fifth executor on the will, only if one of the four named executors refuse to be part of it.”

The 40-year-old also says she was barred from visiting her husband’s grave, “My brother in law’s son had passed away and I went for the burial with my kids. After the funeral, the next day I went to visit my husband’s grave with my kids, we curried some flowers and when we reached at the family’s cemetery. The gate was locked, we knocked and the guard came outside and he said he can’t allow us to enter until we ask permission from my late husband’s younger brother Benjamin. It had never happened before and it was something that surprised me, we argued and my kids started crying, it really pained me.”

When her husband passed away there were also rumours of her dating a Ben 10 something that the denied and termed it offensive, “all these things that have been said about me happened after my husband died. I always ask myself why all these rumours were not talked about when he was alive? I did not have a relationship with the person people are talking about. I have known the man for many years and we don’t talk, I met him a few years back when he was sponsoring fashion shows.”

Jacqueline does not wish to get married again, “that question is hard for me to answer especially when I’m still grieving. They say never say never but right now I think God blessed me with a perfect man and I think that is enough, I don’t think of getting married again.”

Talking about her career as a singer she says don’t expect her to make a come back.