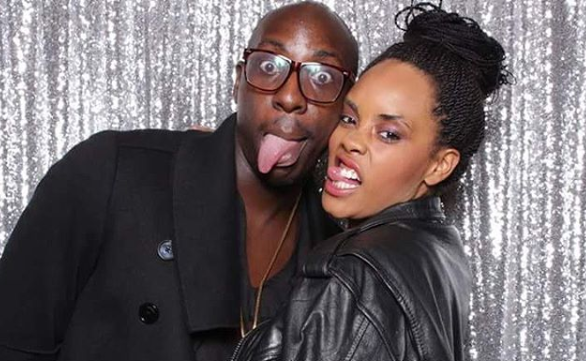 According to a source, the invited guests were informed about the wedding date but were not told the location.

At 11am, Bien and his entourage arrived at the Attorney General office where the couple exchanged their vows.

There after, they joined the rest of the wedding party at Lavington Mall, before proceeding to the after party location.

Among his groomsmen are his fellow bandmates Polycarp, Savara, Chimano and his brother Melvin Alusa.

Guests were told to dress in strictly African.

Last year on February 27, Bien proposed to Chiki at Westgate Mall. The singer made sure it was private affair and hired an entire cinema hall with only close friends and family in attendance.

August last year the couple postponed their wedding, “There is no time the year has already come to an end. Sometimes people change their mind and we have decided to do it at a later date. Those were Chiki’s plans though.

I told you if I was given a chance I would just call people to ask them to meet us somewhere and watch us say I Do,” said Bien.

Keep it Buzz Central for updates and photos!

← Previous Story IT WAS ALL FUN AND GAMES, NO SH1.6MILLION BIRTHDAY PARTY FOR ME SAYS ALEX MWAKIDEU
Next Story → PATRICIA KIHORO AND ANNE KANSIIME NOMINATED FOR NICKELODEON KIDS’ CHOICE AWARDS